Arghhh! Once again Ichabod's Cottage has been dumped on by heavy snow and the scarecrow has officially had it since being dumped on back in October - as have the Bindlegrim denizens maybe even long before then, with a single tiny blue snow shovel to dig them out. With all this white stuff falling, at least work is proceeding on the warm orange glows of  a new hex-shaped paper lantern! 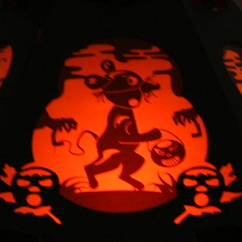 Now that The Haint House has sadly departed, not only has there been development of new images, but also a glance back to the original lantern content of style #1. I was nervous that with the excitement of getting really spooky for #3 The Haint House, it would have spoiled me, however, I'm really thrilled with #1 The Pumpkin Dream, (also a limited edition of 5), especially now that I see it complete. I'm enjoying the simplicity of the imagery that to me seems very classic Halloween. The mostly even positive and negative space of the orange and black seems to focus attention on the silhouettes within the fields of orange!

Here is #1 The Pumpkin Dream, Halloween lantern, in a series of shots spinning the lantern to the left, so that you can get different views of the form in six and four panel increments. (I decided this time to show a peak at the lantern in  darker settings lit by a 3 watt flicker bulb). 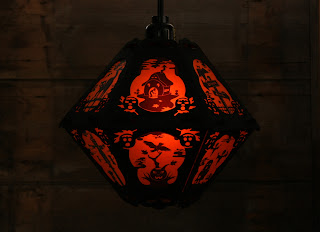 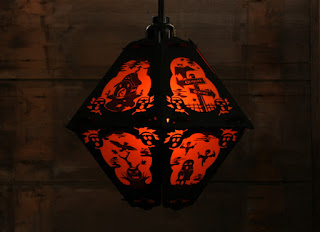 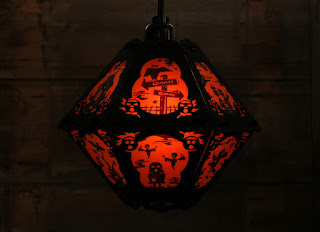 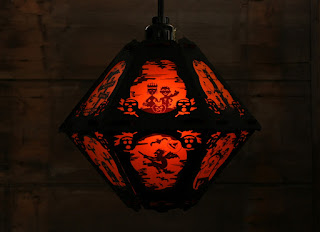 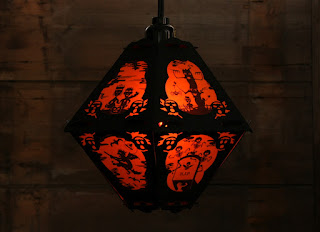 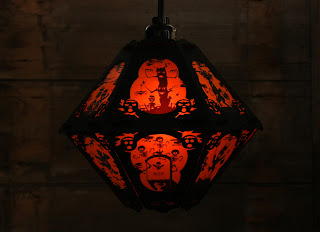 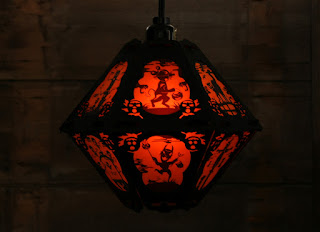 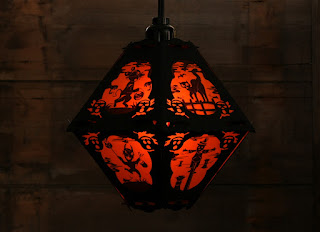 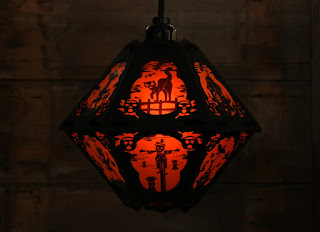 So for the uninitiated, The Pumpkin Dream theme is directly related to a book of the same name released last year in 2011. (I was actually working on completing the book in earnest around this same time last year, so in a way, for me, this lantern is commemorative)...

The Pumpkin Dream poetry was a tradition-in-process of mine for a few years, that was illustrated in retro style characters with a palette of orange and black, and released as a DIY publishing venture via various local stores, my favorite pumpkin patch, and Amazon. Note: I've decided to list the lantern with a copy of the book - yet if you are interested in the book itself, I might suggest etsy for a signed copy. 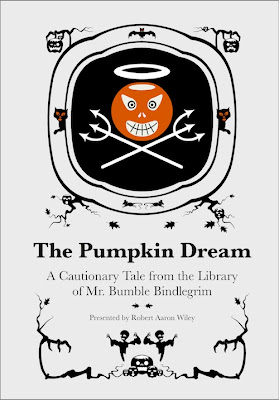 For those familiar with the book, you'll see some small twists in the imagery of the lantern. This final version is a mix of characters and dingbats brought together in new scenes. While the major characters are still present, some of the minor trick-or-treat characters took center stage in panels of their own --- the Princess and the Superhero have found love, the "Jack the Ripper" is being spooked by a spider, and while the Trick-or-Treat Ghost is being haunted by real spirits, the Devil has absconded with his JOL parade lantern.

Hope you enjoy the new adventures of these characters and I'll be sure to post a Bindlegrim blogger entry, facebook message, or twitter message, when this limited edition lantern, in style #1, is available. Happy hauntings from beneath the snow covered cottage of Ichabod's.
Posted by Bindlegrim Bindlegrim at 11:28 AM