This second entry (Tall Tales Shorter Days author notes) begins with humble appreciation for everyone who commented on The Herbivorous Witch! Self publishing is not easy work and all the recent activity makes for great motivation! And that said, please accept my deepest apologies for small errors you many encounter which, though scoured and intensely edited, may have slithered their way into the book. For its majority a solo project, the elfin team of editors, proof-readers, and design goblins of big-books-inc. was not present --- (gah! I just discovered another tiny glitch now fixed). And so I ask for your patience and understanding.

And now for those who have returned to the blog, time to explore Jitter, a tragic and horrifying love story of sorts... loosely appropriate for Valentines week. (And don't forget the giveaway contest for printed copies of the book and a grand prize lantern - details below***). The second story in On Stranger Winds is definitely a darker addition to this book's content. Whereas The Herbivorous Witch is best read with a sense for dark humor, Jitter, is rather more for those who like their horror gritty and grim. At one time I pondered if the book was best split in two halves - on the dark side: Jitter, Let Rains Bring Toads.... and the lighter side: The Pumpkin Dream, Watrous & Valmora, The Ballad of Papi Huesos... with The Herbivorous Witch somewhere out of place in the middle... but the decision was made instead to mix things up for a bumpy ride. I can't say if that was a wise decision or not...?

Jitter, I suppose, would fit the genre of animated scarecrow tales (?) along with Nathaniel Hawthorne's Feathertop. As best I can recollect, the story was partially inspired by autumn trips to the Craven Farm pumpkin patch (Snohomish, Washington), as well as by the following excerpt (below) of imagery dreamt for The Pumpkin Dream (originally illustrated in 2010). However, Jitter travels into much darker territory. Beyond this morbid change withdrew
your friends like dreams forgotten flew,
and pausing at the edge of town
you shiver from what sights abound,
Of corn shock bent in rhythmic charm
at Goblin's Hob and Craven Farm,
as scarecrows in a dance morose
wave tattered arms from broken posts.

In the Jitter tale, a bogle awakens near an early season pumpkin patch. Though he once began as the lifeless and innocent work of protective crop farmers, a nearby witch has since animated him for her own mysterious purposes, which are relentlessly troublesome to the farm. But the farmer's have a bit of of their own magic, and escalate the situation with a second scarecrow. What happens next, when these two innocent creatures become involved in this older squabble, and on one particular Halloween night, make up some of the darker moments in the book.

Note - the wikipedia entry linked above has some great info on the term bogle which I must say I've taken a liking to over the term scarecrow. Here is an excerpt of the Wikipedia article --- "There is a popular story of a bogle known as Tatty Bogle, who would hide himself in potato fields (hence his name) and either attack unwary humans or cause blight within the patch. This bogle was depicted as a scarecrow, "bogle" being an old name for "scarecrow" in various parts of England and Scotland. Another popular Scottish reference to bogles comes in The Bogle by the Boor Tree, a poem passed down in the Scottish dialect. In this ghostly ode, the Bogle is heard in the wind and in the trees to "fricht wee weans". (Wikipedia)" 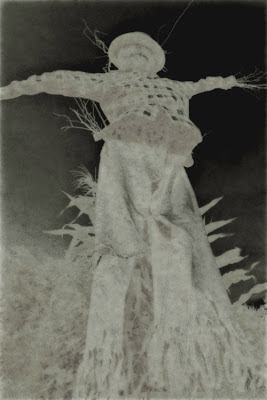 As the first story written for the collection in Seattle, I thought I was setting a self precedent for a book full of scarecrows. And the original title of the book was Sketchbook of Straw (which will likely bequeath its name next time around on volume 2). But curiously enough, and discovered after the book was compiled, witches (of sorts) appear in each and every story, not scarecrows. This collection of witches are quite different from tale to tale. Some are seemingly harmless and sarcastic, while other are treacherous and certainly up to no good. And the witch in Jitter certainly has no warmth in her heart for scarecrows... The snow has teeth...
oddly following a perfect Halloween in Colorado.

As before, I would love to hear from you. The last entry had some great comments on witches! Now, what about scarecrows and/or bogles? All comments are entered into the Giveway mentioned below. In the meantime, a continuing thank-you to all who recently grabbed a copy of the book in either print (on Amazon or Etsy) or the Kindle/iPad e-book version which is available by loan or purchase, (note - loaner availability is a limited Kindle library offer). 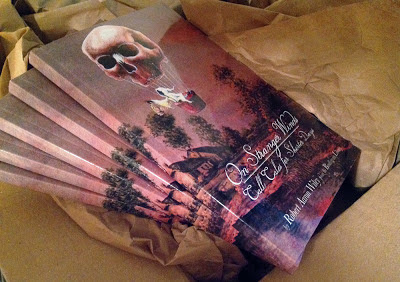 1) Leave a blog comment here about whatever you like... about scarecrows, about writing, good stories, or better yet about Jitter.

2) For each author-notes blog entries, I will draw randomly at the end of that week to give someone who commented a signed printed copy of Tall Tales Shorter Days.

3) At the end of all six blog entries I will draw from all comments (more comments, more chances to win) for one Bindlegrim lantern - The Horrid Decor (Orange on Ghost Skin) seen below. 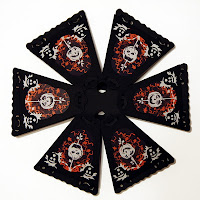 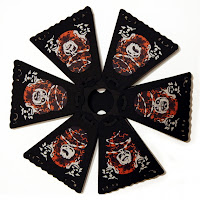