Per his namesake, every once in a while Mr. Bumble has to pack up that tatty ol' bindle and hit the road. And this month big changes are happening as Bindlegrim begins to uproot Ichabod's cottage near the Rocky Mountains for new digs further southward in what is actually a long-awaited return to Nuevo Mexico. Si, es verdad, Ichabod's cottage on the outskirts of the big city will soon be a casita cerca del pueblo. And who knows where the influence may take those brooding bindle-moods once in the land of adobe, chili verde, and kachinas? Perhaps we will see influences such as imagery from Dia de Los Muertos, or perhaps ghost tales of the magical desert? 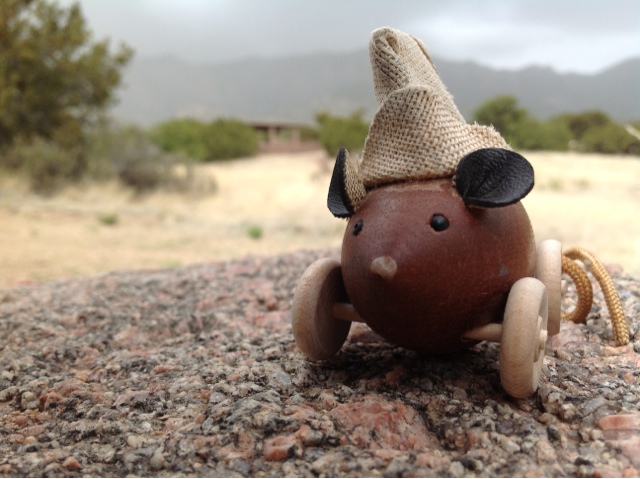 Traveling with Mr. Bumble is his trusty sidekick, El Raton. And this particular mouse dates much much earlier than the hero of The Pumpkin Dream, to a time before ol' Bindlegrim had ever set his toeless shoes into the dusty cryptobiotic soils of the west. This little feller was a Christmas gift (an ornament) that back in the day had found his way swinging from the rearview mirror of a little blue hatchback, bravely establishing himself as the St. Christopher of safe journeys, in the miles before cell phones! El raton is still around after all those years and though often retired from life on the road, he's back on a new set of wheels, rediscovering the desert landscapes of the southwest. He's definitely a little rougher for wear, as is ol' Bindle, but both are happily basking in new explorations of the high desert sands.

Well, the gist of all this fanciful rhetoric, is that the goblins working in Bindle's shop will have much to do over the next month. While it is hoped a lantern, or other item of Halloween art might make its way here to the blog announcements, I hope you can be patient during this time of transition, as a few things are likely to slip a bit until the Bindle, and his sidekick El Raton are once more unpacked and settled in the new digs. Until then, hasta la proxima, and, of course, viva la fiesta!
Posted by Bindlegrim Bindlegrim at 9:51 PM