By the time Halloween 2006 had rolled around, the poem had taken it's general length and narrative, and there were even a few rough illustrations created for it... this was all to correspond with a handmade version of the book, maybe about 10 total (?), that  I produced for a few close friends and for people at work, (this was when I was working as a Design Showroom Librarian - a very nurturing environment for creatives - thank you Jane!) 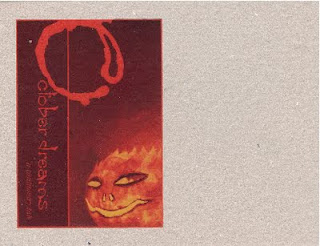 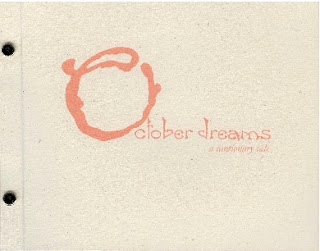 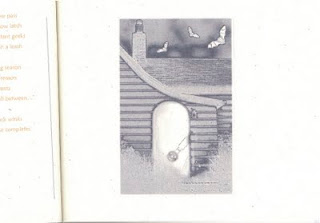 The packaging consisted of reclaimed cardboard envelopes (created many years ago by David and I'm still trying to use these all up...), that I attached with some printed imagery - (the lantern photographed on front was also by David; we had created papier mache pumpkins for a Halloween party a couple or so years previous).

The book itself was laborious. I printed out all the pages, cut them to size and folded, cut the plastic and incised it for what is called a living fold, and then riveted it all together). I realized, as seems to be the case with many projects for me, that this was great for a one-off event, but trying to create something like this for sell would hit my "boredom" button very quickly. I loved coming up with the design but the manufacturing part is not for me... and at the time I registered the whole item as a fun distraction.

Before heading off to Part 3, I wanted to look again into the small bit of illustrations, about 4 for this iteration (one shown above). They were mostly old photographs merged into various collages (similar to work shown here: Flickr - Haunted Visions) but desaturated, etc, for a gritty low-rez print job. Not such great work, since my focus was the poem itself, but I thought, just for yucks, I would relocate and post, although I am still a bit partial to the last image: 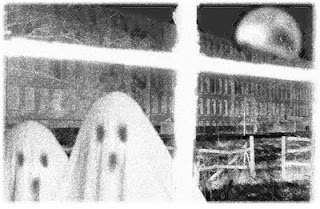 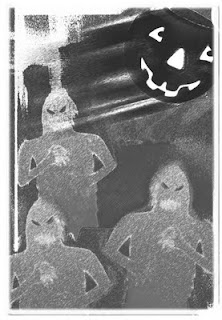 A plastic pumpkin of fairly modern manufacturer zooms past 3 monsters. The monsters were a lifesize cardboard decoration David had created for a Halloween party. 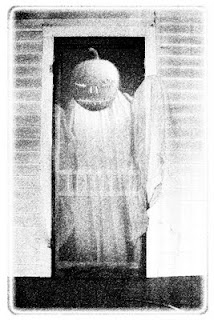 This house was my grandfather's house in Lexington, Alabama. I got David to pose in a sheet (for the set seen in the Flickr link mentioned above), and rather shoddily superimposed a pumpkin head on it)...

And this ghoulish pumpkin head concludes Part 2. On to Part 3... or "Where did all the time go?"
Posted by Bindlegrim Bindlegrim at 7:05 PM