A Brief History of The Pumpkin Dream (Part 4) - Cautionary Vectors

As the idea to illustrate "October Dreams: A Cautionary Tale" became an objective, a new problem developed: I had recently switched systems and my ancient web developer's student copy of Adobe Photoshop 5 and Illustrator 8 (from 1999...!?) would no longer work on the newer system -- and I certainly couldn't afford to buy those expensive Adobe programs and still complete this project. I was very depressed about this situation, feeling once again I was trying to take on another project beyond my means...

As I tried to figure out what to do, I thought I should at least dabble with some trial dowloads to see if it was worth the loss of funds (and touch up on some old skills). My first trial was with Illustrator CS5. And I thought it would be fun to see how well I could re-create, and accurately, some old vintage Halloween Decorations.

These cats are from a Beistle Halloween decoration from the 1950's: the top is a scan of the original and the lower image is a wacom pen trace (with some obvious color tweaks). I'm not sure I had really learned how to use the pressure sensitivity at this point - but I did appreciate Illustrator's ability to selectively drag out and increase line widths in certain areas along the line.

The next images is from a frightening looking pumpkin face from 1931 by Dennison. Again, I couldn't quite figure out how to use the pressure sensitivity to achieve fatter/thinner lines. With this guy I drew the shapes and used lower layers to ink in the color areas. And I believe I was using a new ability to paint vector swaths. (The upper version is scanned - the lower version is my wacom trace vector version): 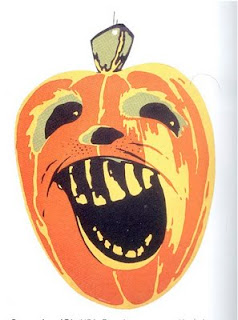 In both instances I was happy with how accurately the images could be created into vector! This wasn't very helpful though, because Illustrator CS5 was still out of reach. (I wish Adobe would let you upgrade in installments toward having the entire suite. There was no way I was going to buy Illustrator which I needed first, then later buy each program separately and spend even more money to get needful Photoshop, Premiere, etc).

As I tried to figure out what to do - the trials continued with AI CS5 on my own work...

Mentioned previously, I had a sketchbook full of work from trying to develop a three-dimensional project. As raw material, it then seemed logical to recreate these sketches. I imagined this might then be a good way of developing and creating my illustrations for the poem. My first go was with this scarecrow sketch: See also my additional test manually/digitally recreating pencil sketches in the first blog entry (Sketchy Beginnings that shows working with the main characters of the poem).

I really enjoyed this.. and may have been getting a tad better at using looser pen strokes and wacom tablet sensitivity with Illustrator... however, my trial period was running out.. and the money was just not there for it!
A friend noted that Painter by Corel was a good program for looser pen work, and it might cost less... and that seems like a good place to start the next entry. Part 5 will cover some testing with Painter and, after that, what became my final solution for my budget - freeware!

On a side note (6/5/11), as I was writing Part 5, it occurred to me, I had tried a test of Illustrator's automatic sketch feature. It's a pretty nifty tool. Below is my sketch followed by the Illustrator output. (Note the settings were used to recreate an image that was as simple and graphic and possible, and the output was tweaked just a bit afterward using the new vector blob brush to smooth edges, and create large areas of black). 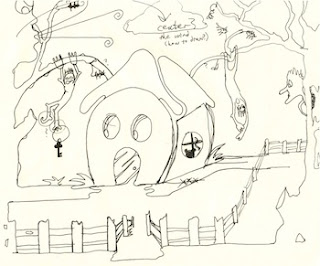 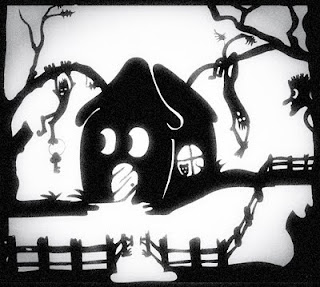 This was an important test, because as I was also searching for the right program, I was firming up my ideas for the style of illustration - and this was starting to narrow down a goal - to create a style that was reminiscent of old 1930s cartoon animation.
A Brief History of The Pumpkin Dream: Part 5 - Monsters from the Id
Posted by Bindlegrim Bindlegrim at 12:28 AM