The Coincidence of Pumpkin Dream Symbolism

While I think that everyone's personal experience of life is too rich and complex to be pared down to a set of symbols, (and this seems even truer during the layered rambles of dreams), I though it was interesting to note that while searching for "The Pumpkin Dream" via search engines, I kept running across results for sites that indicate what it supposedly means to have a pumpkin in your dreams.

What the heck..., I thought I would look into it, and got a fun surprise. The supposed symbolic meaning of the pumpkin really lends itself to the events in the poem... and I should probably be approaching this as something I meant to do, but it was just too fun not to share the coincidence.


1) Openness and receptiveness to new ideas and experiences 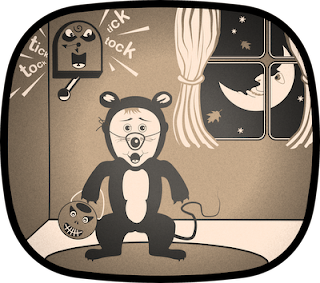 Well, to be fair, the generality of this statement could lend itself to a host of events -- and pumpkins on Halloween night really are the beacons of new experiences. If you light a pumpkin on your doorstep you are asking for all hosts of creatures to come a knocking. And as a trick-or-treater it's a grand adventure into a strange night (with a pumpkin pail in hand to help you reap the rewards).

In "The Pumpkin Dream", the pumpkin Jack is the catalyst of experiences far beyond the norm of door-to-door trick-or-treat. He bears it for a while, just long enough for the main character to fill his head full of candy, but after that he's got much more to share. As the situation changes, he states, "It’s time for me to lead and sow these plastic pumpkin seeds, near open graves where boney sort in Danse Macabre now cavort,” and draws the main character out into the night for experience that involves real witches and monsters. 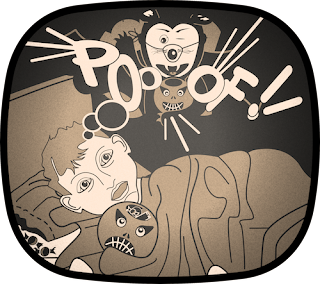 Okay, again, to be fair, nothing lasts forever, and there's a time limit to most, if not all, experiences. But in some ways, pumpkins, especially those plastic candy buckets, are a symbol of trick-or-treating, and that, not only is Halloween night but one night a year, but that we all end up retiring those trick-or-treating costumes as we get older.And, maybe as Jack fears, the plastic pumpkin pails too!

Nothing is so serious in this story, but the clock tick tocks (see first image), and the warnings are there! Granpa has told our main character of all the lurking dangers that await a hapless youth on Halloween night. And Grandpa ought to know - he's got a hand full of educational brochures, and elderly wisdom to back up his story, that mere mortals who adventure too far will lose their souls to all sorts of haints and witches!

And of course matters turn worse, as the willful pumpkin Jack draws our main character out into the night after the trick-or-treating is over, and commences to stir up trouble with the Halloween natives none too happy with the turn of events. Our characters are in trouble and, yes, just like in Cinderella, there is indeed a time-sensitive situation here. They may not make it back home, and the clocks is still ticking!


Well, all that aside, the story is intended for most readers as a fun romp through Halloween night - but I couldn't resist a small amount of fortuitous literally interpretation. And while the poem is actually intended to have layers so that both adults and children can appreciate it, the symbol of the pumpkin as stated here was a complete though happy accident, and I thought it would be fun to share the observations. Muahahaha... Happy Hallowe'en 2011...!!! 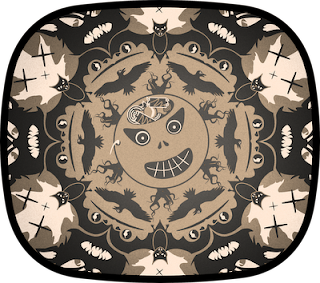 PS - The sepia tone images used above were from an experiment for an alternative printed edition later abandoned due to unsatisfactory printing results - however I still love the way these look on backlit computer screens, and have saved them for a possible video version of the story this future season.
Posted by Bindlegrim Bindlegrim at 10:11 AM