A Gaggle of Ghosts Goes to Town

I was listening to some retro-lounge music the other day - and came across an instrumental version of Mr. Ghost Goes to Town, (originally written in 1936 by Will Hudson, Irving Mills and Mitchell Parish.)  I had no idea there were so many cool versions of this song... each one worthy of a listen. Even today when I was going to say there were just three oldies of this tune - I found another blog writer who mentions two more (so that's a half dozen)!

1) I would have started first with the version by Louis Prima (1936), but can't find it anywhere as a sample online. It's a great version and it can be found on The Halloween Stomp mentioned in this entry: Halloween Music at 78 RPM. 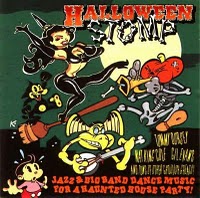 2) The second in this list is by The 5 Jones Boys (1938), and though I'm having trouble finding information again about this band - I seem to remember they were known (minus the acoustic strumming) for creating most of their sounds with the voice: (and they use that to spooky effect here to make sounds somewhere between trumpets and theremins, with even the voice of Mr. Ghost making an appearance):

3 & 4) For two more versions from around the 1930s (the song must have been really popular in that era), here are 2 versions featuring some early twang (one by The Tune Wranglers, and a 2nd by Zeke Manners and His Swing Billies) -- see Music/ Not Music for this entry featuring two early country/western versions: Mustic / Not Music: Three Versions of a Song About A Ghost

5) Switching gears just a bit the next one is an instrumental from The John Buzon Trio, and this is the one that spurred this entry. It's a version that will put a twitch in your tail bone, and be right at home in a cool retro lounge Halloween setting with its swinging organs and funky saxophone. (And if anyone has a collection of cool lounge Halloween tunes out there I would love to know about it!)


6) And finally for a bit of Halloween cheese in your trick-or-treat pail... here's another kicky version from the Lawrence Welk show featuring Bob Ralston in vampire attire playing the tune on the Thomas organ:


Well, do you suppose that's just for starters? With a song this catchy I have a feeling it hasn't fallen out of favor yet... but I think this covers most of the very early versions...? If you know of anymore, please post a comment.
Posted by Bindlegrim Bindlegrim at 3:14 PM