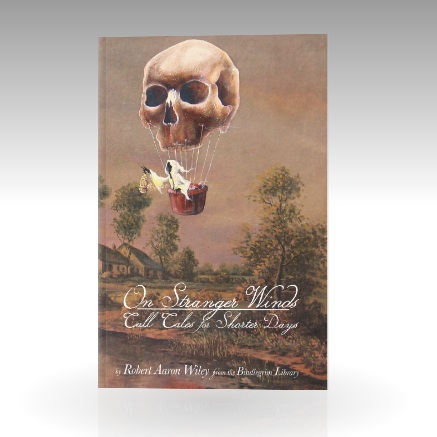 Stay tuned: Offering a story from the book Oct 22nd - 28th on the Bindlegrim blog.

As the weather gets colder... these are the days, the shorter days that is, when ones gets a hot drink and crawls deep into the covers. And just in case your looking to curl up with a good book, may I suggest one specifically written with the season in mind?

If so, the Bindlegrim Library presents for your approval On Stranger Winds: Tall Tales for Shorter Days offering short stories and poetry by Robert Aaron Wiley. And this blog entry is here to offer you a few teasers, as well as introduce one story, a serial story, that will be available here on the blog next week, due to the book's near release date to that celebrated holiday, Halloween.

First of all I would like to thank David Irvine, The Gnarled Branch, for allowing me to use his wonderfully atmospheric re-directed painting "The Traveling Ghost". I was rabid to have this piece on the cover, because not only does it have that great early American romantic feeling to it, (something you might see on a Washington Irving book), but it hints at the mood that I was aiming for in these tales, some of which were actually scenes written to describe vintage postcards.


Secondly, I would like to thank Daniel Boyer, criticalcorner.net, for his jaw-dropping foreword. I was honored that he agreed to write some words for Bindlegrim. I have been a long-time fan for his power as a storyteller (often saying, when I could catch my breath, "You got to write this stuff down!") and of his work over the past few years for both his humorous movie blog and his many  professional reviews seen elsewhere. And when he heard how I was gushing, also thought it wouldn't hurt to mention "that busload of nuns saved from an earthquake in Peru." Anyway, with all of that, somehow he found the time to write a foreword briefly excerpted here:

Robert Aaron Wiley (aka Bindlegrim) will without a doubt take you to a colder place, a world where trees are decorated in gold and orange if not barren, and darkness reigns supreme. I would be remiss if I didn’t say that there is happiness and humor to be found in such corners, when you look close enough, but by all means proceed with caution.

Wow! I certainly hope the inner content following all of that (cover art and foreword) can live up to it! The work that has been included is listed as follows, and they are a mix of light and dark... (I won't tell you which stories are light, and which dark).

Of the above, two stories (and the poem), take place on Halloween night. The remainder are spooky tales, but not specifically tied to the traditions of Halloween. And I hope, as the subtitle implies, the stories within can be enjoyed throughout those shorter days of the year. Though, if I may quote the foreword again, Daniel writes, "You might read this book by a fireplace in the dead of winter, or perhaps even by the pool on a summer holiday.  No matter. Robert has October’s heart beating in his chest, and you will be transported accordingly."

So, with October's heart beating in my chest, I had initially hoped to have this collection of Bindlegrim writings published by the beginning of October 2012. However, as a self-published work, taking on many roles, I have found myself in an quagmire of my own undoing - self editing, though nearly complete!

Although the delay is unfortunate, I thought this would also be a great opportunity to release one story, in its entirety, here on the blog.  A Halloween themed story, of course...