To celebrate the upcoming holiday, Bindlegrim Productions is proud to present Watrous and Valmora: Further Tales of Pumpkinheart, (from the book On Stranger Winds: Tall Tales for Shorter Days). And, through the magic of modern blogging, we offer this Halloween-themed selection as a vintage-style serial during the chilly nights of October 22nd to the 28th.

In our opening segment we visit with a couple of innocent trick-or-treat children at a tiny cottage on the edge of town, and receive an introduction to the mysterious existence of the Pumpkinheart. 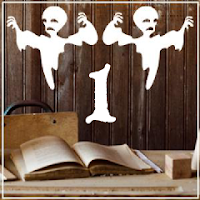 
The little three-and-a-half-foot werewolf stretches the word into a high-pitched whine of long syllables, up and down the scale, as he turns toward the jeweled queen behind him. Almost growling in character, he defiantly pushes and repeats in one short loud bark.

In exasperation the queen huffs and with haughty attitude replies, “You forgot the magic words.” Then with more emphasis she says, drawing out her word in mockery of the boy’s previous long howl, “a-gainnnnnn…!” Taller by a head, the queen brushes the paw away from her sparkling sequined finery.

Spinning the boy back around, she explains once more, “I’m trying to teach you. It’s very important.” She whispers this loudly in obvious frustration so the person in front of them can hear she herself knows better what constitutes proper trick-or-treat etiquette.

Behind his wolflike features the young boy’s cheeks turn red, and he promptly blurts something like, “Tickle teeth?” Moaning, the girl whispers again quickly into his ear, to which he states loudly, “Trick or Treat!”

There is heard a very pleased and proud gasp, and the light clap of hands. Their audience is a withered old form sitting on a barren wood bench. On this brisk autumn night, the woman is dressed in a plain gray wool dress, shoulders wrapped in a knitted mustard-color shawl of thick patterns. Her form is barely visible beneath a low watt bulb inadequately lighting the gloomy whitewashed porch of the old cottage, the building’s foundation standing behind a crowded lawn of late season sunflowers many feet beyond the brighter street lamp.

“Well, look-y there,” and the old woman fusses over the scariness of the young lycanthrope (of corduroy fur and grease pencil whiskers) receiving a much visible boost to his previously frustrated morale. She turns to the bowl resting on the bench beside her. “You almost scared me out of this whole trick-or-treat business,” she winks. The boy’s grin turns huge.

Her withered hands pull out a treat passing it quickly between them to the floppy pillowcase held firmly in the fur-gloved hands of the little boy. On hearing something thud to the bottom, he remembers this time the incessant training of his older sibling perhaps assisting with a nudge. The boy squeaks out a proper thank-you before turning around and whisking off to wait by the sidewalk.

The young girl, with noble dress and imperial regalia, steps forward and without hesitation slowly emotes the night’s key phrase as royalty, “Trick… or… treat.” With one hand her royal scepter thuds to the floorboards, while the other hand comes forward revealing a plastic black cat-faced candy bucket complete with its very own tiara.

The woman looks at her wide-eyed. “Oh my, how gracious of you to travel among the peasant folk! I am not worthy your highness!” The tiny queen smiles with satisfaction, and waits patiently for a proper show of tribute to be gifted from this lesser subject.

“Let’s see,” says the old woman eyeing the little girl carefully, one seemingly innocent creature to another, time passing in what almost seems like a game of poker. The woman turns to the bucket and, instead of spiriting the prize into the young girl’s candy bucket, brings it out and waves it into the air like a wand… a single small pixie stick, its packaging faded and even perhaps a bit dusty. The old woman smiles through her frailty, with love for what she does. And after tapping it to the nose of the young queen, holds it outward for a hand to hand transaction.

The little queen looks at the offering and, with a smile falling to a flat horizontal line, stares seemingly stunned. After a pause she lifts her royal pail so the gift might fall inside. When she looks back at the old woman, to see if there may be some forgotten additional prize, the frail figure has already reclined with hands resting upon the drab fabric of the dress. All the while the woman continues smiling at the deflated girl.

The small monarch slowly sensing that the game of trick-or-treat has ended, recaptures a semblance of manners and mutters a belabored thank-you with a small wave from her scepter as she turns back to the street. At this, the smile of the old woman drops. “Wait there, your royal highness,” her voice splinters, “I may have forgotten something.”

As the miniature sovereign comes back to the bench, the woman lowers her face down to the same level. “You have,” she says with voice cracking, “keen aspirations for the finer things in life, my dear,” and her smile breaks to one side.

The young girl stares back, waiting, making sure her back is straight and her heels turned properly, chin upturned, and with scepter and candy pail neatly placed to the forefront. Her glittery array (dress, crown, royal staff, and jewelry) catch small bits of light, and her cheeks blush slightly on her soft skin. Blue eyes look hopefully upward at the woman’s, and shine a certain hope for a forthcoming prize in this extended round of trick-or-treat.

The old woman’s face nears within the porch light, and this reveals pale tissue-like skin replete with the texture of countless years. Her lips part once more into a smile, this time though, in the new light, revealing the remnants of black teeth turned at obtuse angles, her face now perhaps too close, wafting a most unpleasant odor.

“My young queen, I understand what you seek. And I believe you deserve it! You have obviously shown yourself an expert in the political arena of such trifles as trick-or treat...” Her words trail as she straightens her back. This induces a painful wince during a simultaneous string of loud pops in old bones.

Unsure where any of this could be going, the young girl remains silent, still expecting another piece of candy or two to come from the candy bowl, or better yet, a larger guilt-trophy such as a heaping handful of small coins. But the old woman continues talking and brings her face in closer, looking directly into the face of the girl. “You, my dearest, you deserve a jewel. And I happen to know of one... called the Pumpkinheart!” Which, at that, the eager girl’s eyes light up and her legs wiggle just a little in anticipation. Is that even a slight nod she gives?

“You see,” continues the elderly woman, “there is, on every Hallow’s Eve a certain pumpkin patch given property over a priceless jewel. And would you believe how lucky for you, that this particular patch is not too far from here? In that one patch exists a pumpkin holding within it a seed made of charmed gemstone! This, my deserving spirit, is the grandest of all prizes on Halloween! I would go get it myself but I am too old for such things. And so my great gift to you is the telling of this secret. Is this not much better than the candy you would get from a million lifetimes of trick-or-treats?”

“Where?” The girl wastes no time in asking.

The old lady smiles, turns to her candy bowl, and pulls out another ancient pixie stick. She waves it in front of them, again kissing it to the girl’s upturned nose, and waves it in a certain direction down the street. “That way,” the serrated voice instructs, “near the old schoolhouse to the east, and just past the Kilkenney’s corn field. If you journey to the far side of the property you will discover a small acre of pumpkins near the water tower. You cannot miss it!” And at that the old woman plunks the second treat of questionable value into the girl’s candy pail.

The young girl’s excitement is beyond measure. This time the royal highness curtsies with perfect aplomb and returns the most humble thank-you to her loyal subject. And as she makes her way toward the street she turns and calls back, “Thank-you, thank-you, ever so much! Happy Halloween!” And grabbing her brother, who has been waiting impatiently beneath the street lamp, runs off with him in the direction of the once-waved pixie-stick wand.

Behind them the old lady chuckles quietly, lovingly. As she stares in the parting direction of her trick-or-treat visitors, the porch light begins to flicker and breaks its coil. As if in sympathy, the street lamp promptly follows the same process. While sunflower heads sever and thump upon the ground, the weeds devour the previously welcoming path. And but for a dim reflection shining in her cataract eyes, all around the moonlight shuns this scene as darkness deepens in every nook of the landscape.


Stay tuned for Part 2 of Watrous & Valmora, as our trick-or-treat queen and the young werewolf head out into the night in search of the Pumpkinheart.

Tonight's story  was brought to you by Bindlegrim - maker of fine vintage-style arts for the autumn season.  We thank you for tuning in to this special presentation, celebrating the release of On Stranger Winds: Tall Tales for Shorter Days, (a book offering both light to dark writings of whimsy for autumn and winter), coming soon in both digital and print formats.