To celebrate the upcoming holiday, Bindlegrim Productions is proud to present Watrous and Valmora: Further Tales of Pumpkinheart, (from the book On Stranger Winds: Tall Tales for Shorter Days). And tonight, through the magic of modern blogging, offers this Halloween-themed selection as a vintage-style serial during the chilly nights of October 22nd to the 28th.

After a watery introduction (in Part 4) to a sad drippy ghost, the spirit joins Carbon & Valmora on their quest to save Watrous & the Pumpkinheart. But they must first cross through a spooky forest to get there... 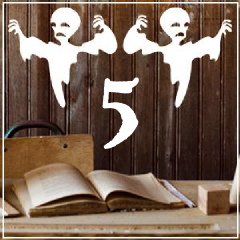 
“That’s weird…” Valmora muses as they reach the playground’s exit. She has noticed a peculiar change. “I used to walk back and forth to this school when it was still open, so I know we’re heading the right way, but this road was much nicer even just earlier tonight. Now it’s just creepy! The last time I was here, the street lamps were lit and there was a proper sidewalk. But just look at all the tall weeds overgrowing all of it. Seems as if the few trees around here have turned into a forest. I can’t even see the moon.”

Beside the playground gate, Valmora and the ghost pause at the side of this road. She is unsure but tells herself that roads don’t change overnight. Carbon is many steps ahead but he looks back questioningly. Beyond him stretches the forested area, wind whistling gently and limbs creaking.

Valmora remains in place and shakes her head. “I don’t know,” she says slowly. “This just doesn’t look like the same road. I have a very hard time believing we would have ever walked through here! I didn’t want a jewel that badly, did I?”

“Ah, this is not so scary!” The ghost whines in a fashion that Valmora has learned makes every fact, good or bad, sound like the worst thing in the world. “But I can tell you I sense a charm in the air. I think you are seeing things now as they really are. Or else they only appear to have worsened.” As usual the statement is followed by a pitiful sob. And after a few more sniffles after which he blows his nose, he continues to assure, “I am a ghost you know. I’m not so easily spooked.”

But at the flutter of wings just a few feet above their heads, they all jump having only just minutes ago escaped the terror of the crows. This time, in an old broken tree there is a hoot owl alighting on a branch. He settles as if purposely facing them, and tilts his head a few times together with a couple of quick blinks. The stunned silence is broken as he calls down to them, “Whooo whoo, whoo whoooo.”

Carbon sits down, calling out to the group not to worry, and looks up at the owl. “Is that so?” he replies. “Well, my fine feathered friend, I can’t say we would know what to make of that statement. For all we know you might be just another accomplice of the witch.”

Valmora walks nervously over to the cat as the owl turns to look. In response she crouches low beside Carbon. “You know what the owl is saying?”

“Well, of course, my dear girl. I can decipher quite a few bird languages, though I’ve never been able to speak them. Basically, in human terms, he is warning of danger, that there is a witch up ahead.”

His big eyes blinking, the owl watches the trio down below. He perches there impatiently yet seemingly waiting for an appropriate response.

“Can you talk to him?” Valmora asks the cat.

“Well, uhm, I don’t think so, but I’ll try,” and Carbon attempts a few lame hoots back at the owl. In return the owl blinks and extends his ruffled wings. His beak pops open-and-shut a few times. But ultimately he settles upon the branch; the head is cocked with big eyes winking, yet the creature remains silent as if puzzled beyond reply.

“Hmmm, I see, well I guess the answer is no, I cannot speak owl. But just maybe he knows a bit of cat?”

“Oh no!” the ghost bellyaches. “From what I heard earlier, he’ll never understand your bad cat impression.”

Carbon flattens his ears, and looks over at the pitiful spirit. “Look, sir, have I mentioned to you what a pleasure it will be once this Halloween charms flies away? No more conversations with your miserable soul…”

“Oh, now, don’t get snippy with me,” the ghost whines, “I just clobbered a few foul bird brains for you earlier… so show a bit of respect.”

Valmora steps in and urgently whispers at the the two of them. “My friends, we’re in a hurry!”

Carbon stops short of a full retort to the ghost, and responds with calm civility. “Quite true, my dear Valmora,” and instead turns to the owl, though he slyly flips his tail self-importantly in a silent gesture meant for the spirit. He proceeds to meow a few of his best, though still obviously human, impressions of how a cat might sound, trying his best to remember his native cat tongue.

“Whooo whoo,” the owl cries. It blinks, waves it feathers, and follows with a few more hoots and various beak clacks.

“I see then!” Carbon says to his friends. “Well, then here is the news. The owl says the witch house is just up ahead. And the place is guarded by many crows.”

“He also says the witch has captured a small werewolf?”

“Watrous!” Valmora whispers loudly to the cat and she looks hopefully upward at the informative owl. Adjusting her nervous crouch to a more regal air, once more as royalty, Valmora now accepts his audience. “Ask him if he can help us?” Valmora asks Carbon as the ghost snuffles under his breath that he alone would be happy to flatten a huge number of those awful crows.

Carbon meows up at the owl. This time though there is again the long silence, and Carbon confides to Valmora, “I’m pretty sure he understood. He seems to be ignoring my question.” Carbon looks up, semi-repeating his earlier string of cat sounds, but much longer this time as if telling a story to which at the end, the owl extends his handsome wings, clacks his beak, and hoots before calming.

Carbon sighs. “Well, basically the simple answer is no. And considering what we are about to do, I would guess owls are smart creatures after all.”

Valmora sighs but she is not one to argue with a wise old owl. “Then we must be on our way. The owl has at least given us good information.”

“Wait,” the ghost interjects. “We do need one thing: a messenger. I asked the scarecrow to stall the pumpkin wizard until we could return the jewel. But the scarecrow should be told of recent events. This bird could tell him of our further travels, and the location of the witch house. Will you ask the owl to go there and tell him these things?”

Carbon meows back at the owl, to which the owl returns in a number of brief hoots. And Carbon mews briefly back in an appreciative tone.

“Good,” Carbon announces to their little group. “The owl will fly to the scarecrow. He is going to take his evening’s hunt in that direction and will pass on the information, killing two, uhm, rats, as it were…” but before the cat can complete the pronouncement, the owl lifts off the branch. They watch the raptor’s shadow travel over them, and past the derelict schoolhouse.

“Well,” moans the ghost, “it’s always a good idea to let someone know where you are going, or else when disaster hits, no one will find you.” He breaks into a crying jag that neither Carbon nor Valmora can stop. They wait for a few minutes but, when there is no apparent change in the specter’s attitude, agree to continue onward hoping their nebulous grief-stricken friend will catch up.

“Are all ghosts like that?” She wonders aloud, doing as much as she can to hold a conversation as they pass through the unbearably dark road leading them ever closer to the terrifying encounter with the witch.

Carbon walks slightly ahead, always on the watch for trouble. “Well, I haven’t met many ghosts but I think they’re as different as cats. And he was once human; we cats are still mystified with all you various people types.

“Anyway, I think he fell into that old well, and broke his neck or some such thing. It’s all very sad really. Humans can be so clumsy… uh, well, no offense to you. Anyway, I’m always patient with the guy around the farm, but until tonight, speaking with him, I had no idea how insufferable he could act. I can’t help but wonder if someone pushed him down that well deliberately!” Carbon’s ears flatten as he glances back at the ghost, still crying in the middle of the road amidst the dark woods.

Carbon faces front, and spots what seems to be a dim shaft of moonlight. He turns to Valmora asking her to wait and vanishes into the darkness. She sits there alone listening to the scraping of branches in the wind and, on occasion, the insufferable whimpers of the ghost, which isn’t helping calm her awful chills. She wants to ask for his company but is too frightened to call out.

After what seems to pass as an eternity, she hears Carbon approaching, identifying himself so as not to scare her. “I think I have found the witch,” he informs. “There is a cottage up ahead, a tattered gray thing with a big front porch, just as you described. The lights are on inside. Crows surround the house though, and they are making terrible noises quarreling with one another, which at least helped me come and go unnoticed. But I couldn’t get close enough to see into any of the windows.”

He sits next to her and ponders the situation, “There is no way you and I alone can do this. I think we should try and get through to the ghost, ask for his help…”

“Oh, don’t bother, I am already here,” says the ghost, uselessly trying to dry his eternal tears with the back of his hands. “I have some company.” His words are followed by chattering in the air, and Valmora identifies the bats. She remembers the flying animals’ brave attack on the witch earlier this evening. She spins about in the friendly cloud and speaks both apologetic and welcoming words.

Carbon spins his confused head about, eyes wide, taking in the haphazard flight patterns of the new arrivals. He looks pleased. “Well, my friends, I think we have gathered together everyone we could, and more than I ever expected. I suggest we take a moment now to make a plan!” And the group huddles, preparing their whispered scheme, as the bats flit above them in an obscure blur.


Stay tuned for Part 6 of Watrous & Valmora, when our heroes reach the cottage of the horrid witch. Unfortunately, their rescue doesn't go according to plan...

Tonight's story  was brought to you by Bindlegrim - maker of fine vintage-style arts for the autumn season.  We thank you for tuning in to this special presentation, celebrating the release of On Stranger Winds: Tall Tales for Shorter Days, (a book offering both light to dark writings of whimsy for autumn and winter), coming soon in both digital and print formats.
Posted by Bindlegrim Bindlegrim at 12:00 AM