It's really encouraging that when a Bindlegrim vintage-style Halloween lantern has been previously posted on ebay , there is often request(s) for where these are found for sale elsewhere - to purchase one or more right away. And though in the past I could only answer that these were limited editions available through the auction process - I've been working on a better answer - to provide a new style that can be created to order - that is not limited edition!

While there will still be limited editions - today I'm introducing art for The Horrid Decor lantern (of some unknown production amount) featuring the aura perhaps of vintage-style Halloween party swag a la decoration ideas you might see in the old Bogie Books by Dennison. The new 12-sided lantern will feature 6 Jack O'Lanterns with expressions from grim to happy - decked by crepe paper streamers and bows, with a background of vines, leaves, and even a bit of flame. (The title is tongue-in-cheek in the spirit of Edward Gorey, and originated from a post conversation on Bindlegrim facebook . I had posted an early art version to which one of my favorite Halloween artists Retro Rodolph's stated was getting fancy, to which I replied that I hoped it was "horribly fancy", and the title was basically born). 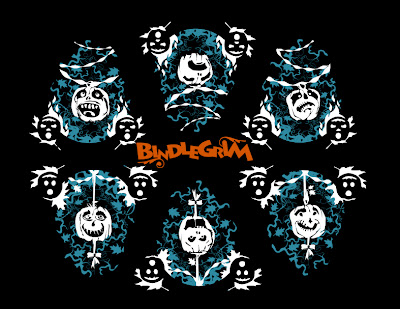 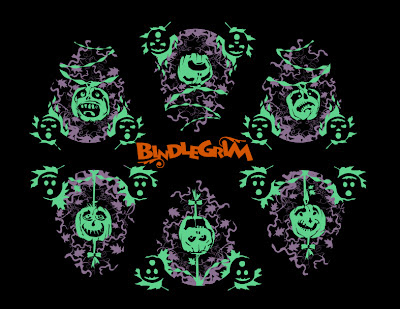 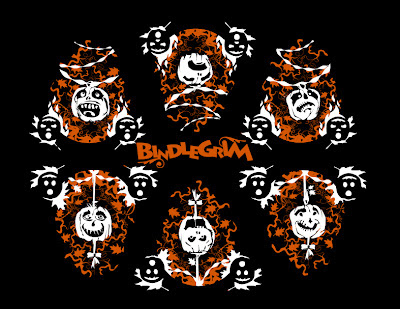 The Horrid Decor lanterns will be constructed of the same quality acid-free materials, manufactured in the USA, assembled by the artist, and in this case will be available as-is or created to order, in your color of choice. Above are some color suggestions (such as Hitchcock Blue, Pus & Bruise, or Classic Orange) - but the scheme is ultimately up to you!

It is hoped I can list the first of these on ebay tomorrow. Until the end of the auction that will be the only one available for the time being, but following that, in the next week or two, I will post them as a regular-priced item in the Bindlegrim shop on etsy. (where I've been selling bobbles, cards, and other Bindlegrim goodies, not to mention copies of The Pumpkin Dream book)....


But trembling smirks from candle beams
Devour themselves in ash and steam
As vapor licks the ailing hearts
Of smoldered pumpkins in the dark.*
From the Halloween poetry book *The Pumpkin Dream (c) 2012 Bindlegrim aka Robert Aaron Wiley