The Shoppe of Ghastly Designs

It could be said the poor ol' Bindlegrim is burning the cucurbita candle at both ends... trying to cram a whole host of those pesky doing verbs into a few short months since the studio moved. And after a bit of an exhausted crash (this past week) fortunately found a second wind this evening to get few things done before the day starts again early tomorrow...

First and foremost, was to add some lanterns to the Bindlegrim Etsy Shop, for a total now of four Horrid Decor paper lanterns in a variety of color schemes and material types. 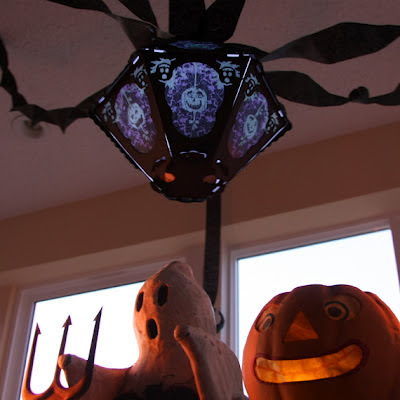 Shown above is The Horrid Decor #2 in colorway Pus and Bruise on Ghost Skin (uh, ehr, known to most mortals as onion skin paper). The paper mentioned has a great crepe-paper type surface (though more durable) and the lantern here was photographed during a desert sunset, hanging out with a recent-era ghost from Hobgoblin (left) and a vintage German Jack O'Lantern (right). 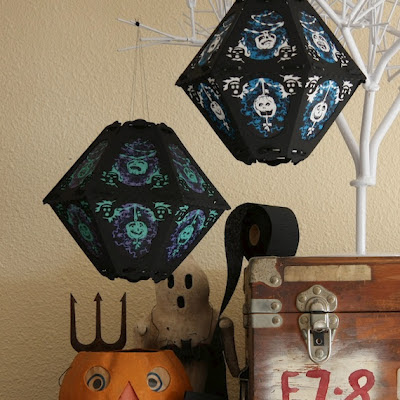 The Horrid Deocr #3 in colorway Hitchcock Blue on Ghost Skin (is also available now) and is show here in a similar shot with the Pus & Bruise lantern above... while tonight two more were added in the more usual autumnal color palette of orange and black. 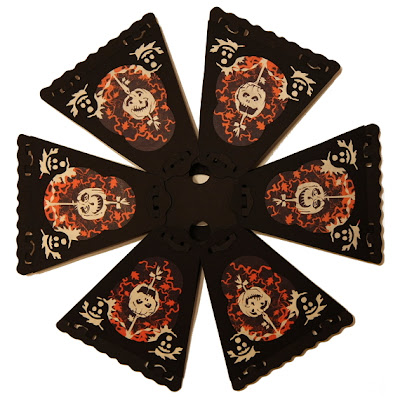 There were also a couple of older projects re-added to Etsy on some remaining stock, and hope you might be curious to check out the entire shop at your leisure. In the future I hope to do more stepping outside of the digital world, and do more shows, maybe even perhaps Halloween & Vine which would be absolutely awesome, but sadly that will have to wait until year 2013. 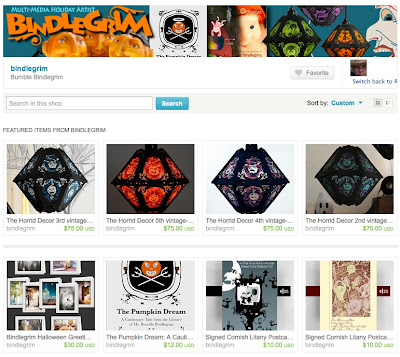 In a couple of side notes, Bindlegrim actually got a chance to peruse the internet for some olde tunes to add to the existing playlist on Bindlegrim's vintage Halloween radio station. 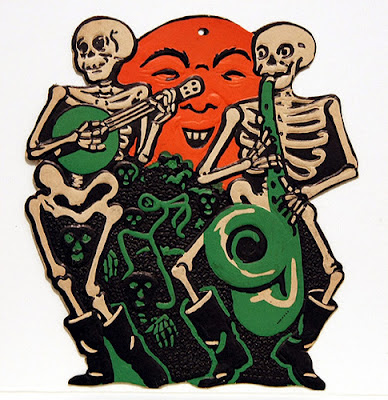 Added to the now 3+ hours of vintage Halloween jazz oldies are the following tunes: Hush, Hush, Hush, Here Comes the Bogey Man by Henry Hall, as well as The Haunted House Blues by Helen Gross (which starts off comically enough but don't miss that blood-curdling scream at the end). Also added are 2 version of The Little Man Who Wasn't There. The first by Glenn Miller has some appropriately spooky-themes light-hearted banter, yet the second by Teddy Grace takes on a more sarcastic tone that sounds like she's trying to forget a bad relationship. And finally a big thank-you to Pumpkinrot (also on etsy as Pumpkin Hollow) for their recent blog entry noticing the above image. Would you have guessed the styling for this October scene was occurring in the middle of summer? Alas and alack, it's not autumn quite yet... but Mr. Bindle sure seem to be enjoying the spirit of the season amidst all this heat!
Posted by Bindlegrim Bindlegrim at 11:34 PM