Spooky Vintage-Style Bagatelle #2 Rumble Bones (OOAK)
In the continuation of re-claimed bagatelle pinball games, (see earlier piece #1, The Spook Hunt), Bindlegrim has again been playing the pinball wizard..., and found some time in the studio to complete this one-of-a-kind piece of Halloween art - Rumble Bones! And this particular game has been listed (as of last night) as a 7 day auction on e-bay: OOAK Bindlegrim BAGATELLE vintage-style Halloween RUMBLE BONES pinball game: 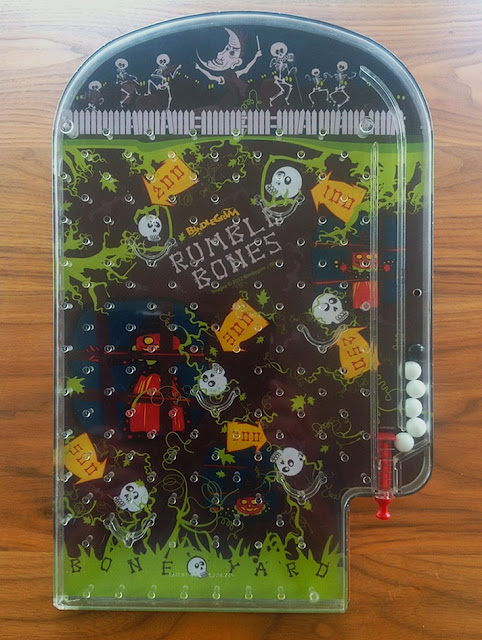 This 2nd bagatelle (10" wide by 16" tall) began with imagery based on the racket the marbles creates pinging against the multitude of plastic pins. And so, what began as a grumpy old moon (covering his ears) transformed into a bandleader with baton directing a quartet (vocalist, fiddle player, drummer, and skellie on squeeze box), as a couple dances to the right. Below their graveyard stage, near a picket fence, is an underworld of twisting vines and roots clutching point-scoring skulls. Creepy vintage-style scarecrows (a la classic Beistle) lurch outward through windows. And at the bottom of the scene rests the bone yard.

Typical game play on these games are as as follows: white marbles score points, while black marble doubles the points. In this version the Bone Yard is a gutter ball area, although I thought a fun alternate method of game play might be to earn 50 points per letter, if you can come with spooky-themed words beginning with the letter of the marble's final destination in the Bone Yard, (but that's up to you).

Here is a rough-shot video of the game under normal operation:

Please note that this is a reclaimed object, and while I have tried to select good-condition objects, there are ding, as seen in detail on the e-bay listing (and on flickr). Following is a gallery of in-progress and finished bagatelle work by Bindlegrim, and I hope you enjoy the strange diversions.