Week two of the Bindlegrim sale - and already some items in the Creeps editions are sold out as I pack their bindles with care for cross-country travels literally coast to coast! Again, thank you to all who gathered for week one.

It actually appears that the Summer Lantern Sale might be something of a misnomer, as I seek to fill out some unexpected gaps in the coming weeks - but for you 12-sided lantern fiends (and I know there are a few) I do plan to list the last 12-sided Creeps lantern in the final fourth week.

As I pull together some oddities for week three, here's a quick review of what is currently up for grabs in the second week ending Sunday, July 26th. 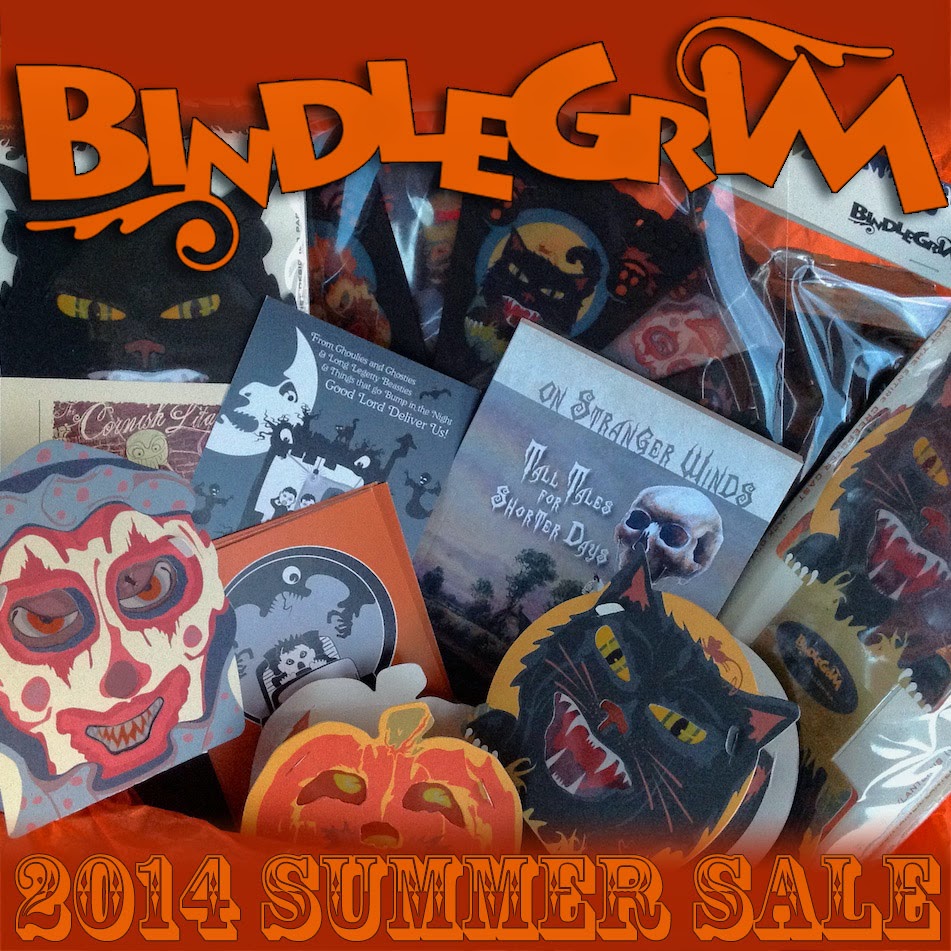 This listing is for the last full set of vintage-style candy-container lanterns from Spirits, a 5/5 limited edition set of three characters designed, printed, and diecut in the artist's studio. While a couple of characters may show up solo, this is the last of the Krampus characters available.

This is the fifth in an edition of five packaged sets - each character is signed, and the package insert is numbered #5/5. 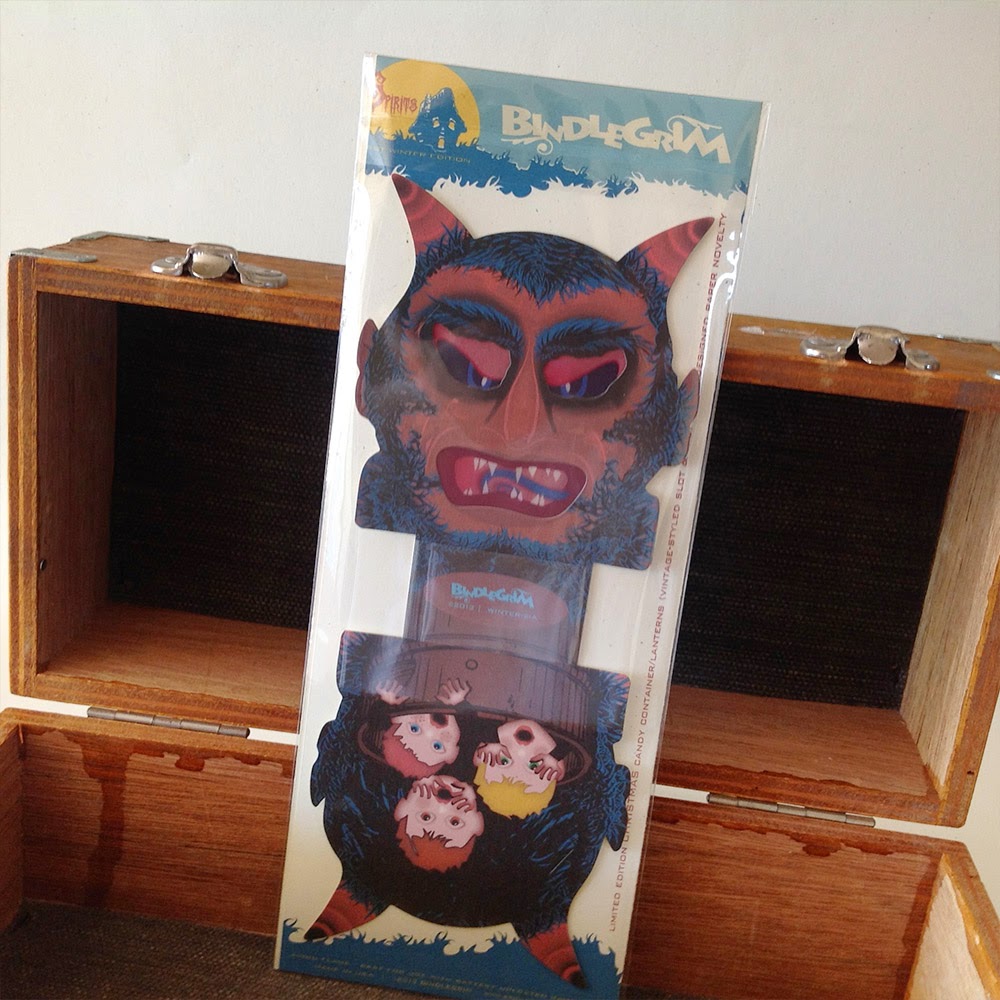 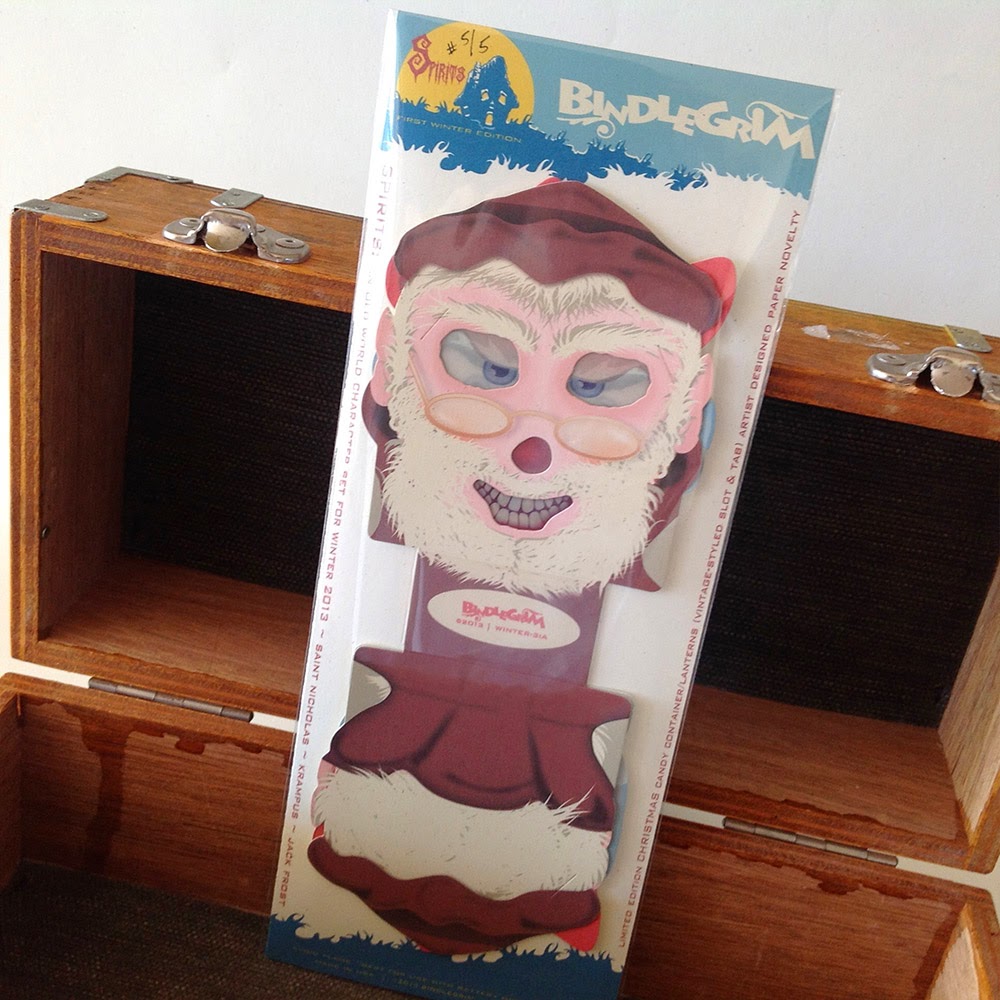 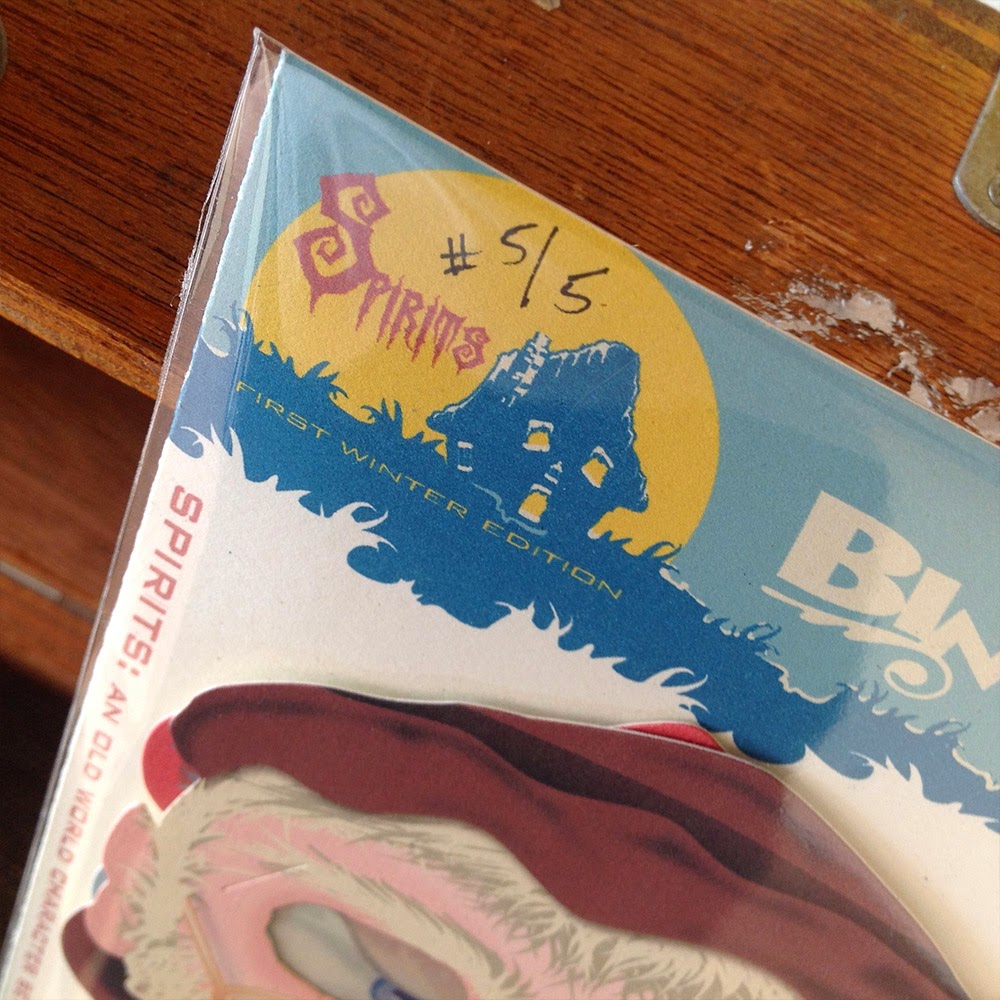 Since Bindlegrim reached outside of the Hallowe'en norm for the above Christmas listing... this Easter card was also included to bring in a little more cheer, albeit slightly twisted once again. This print postcard was limited to a run of only ten cards, each with a peek-a-boo folio. This card is signed and numberd #4/10. 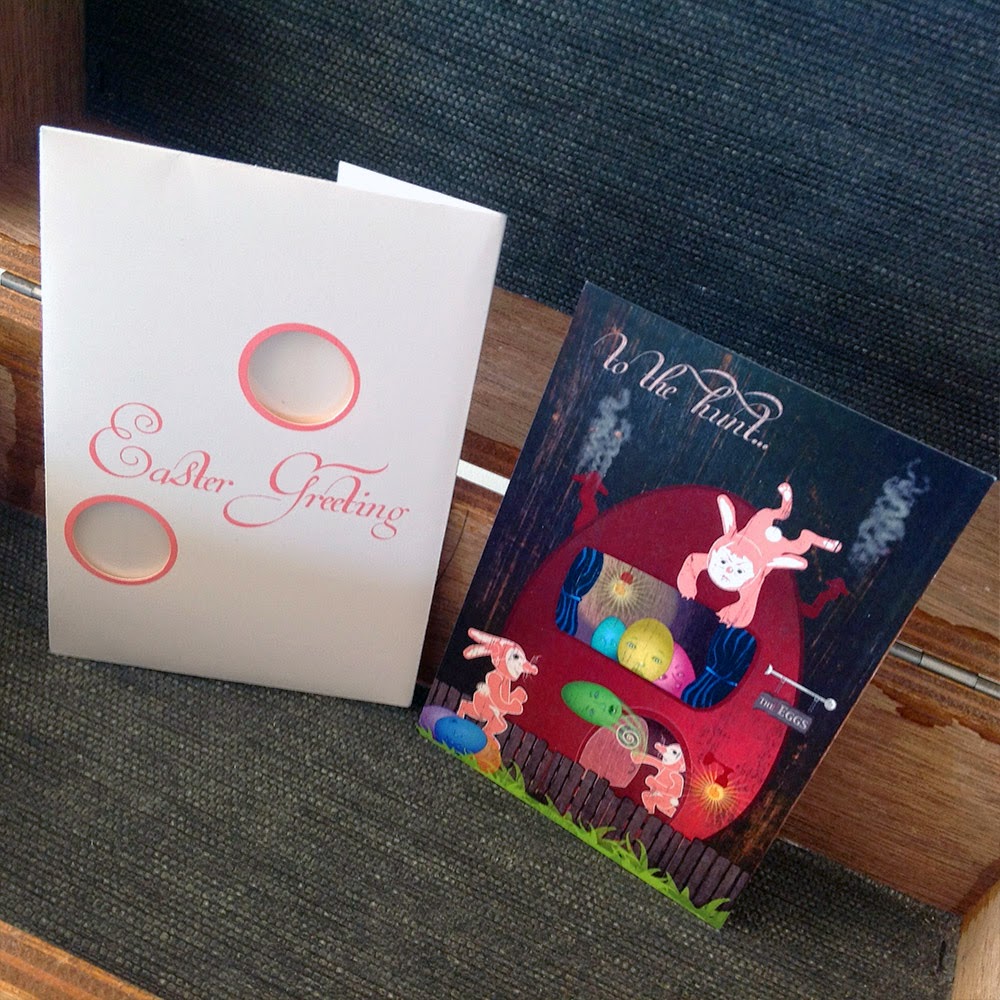 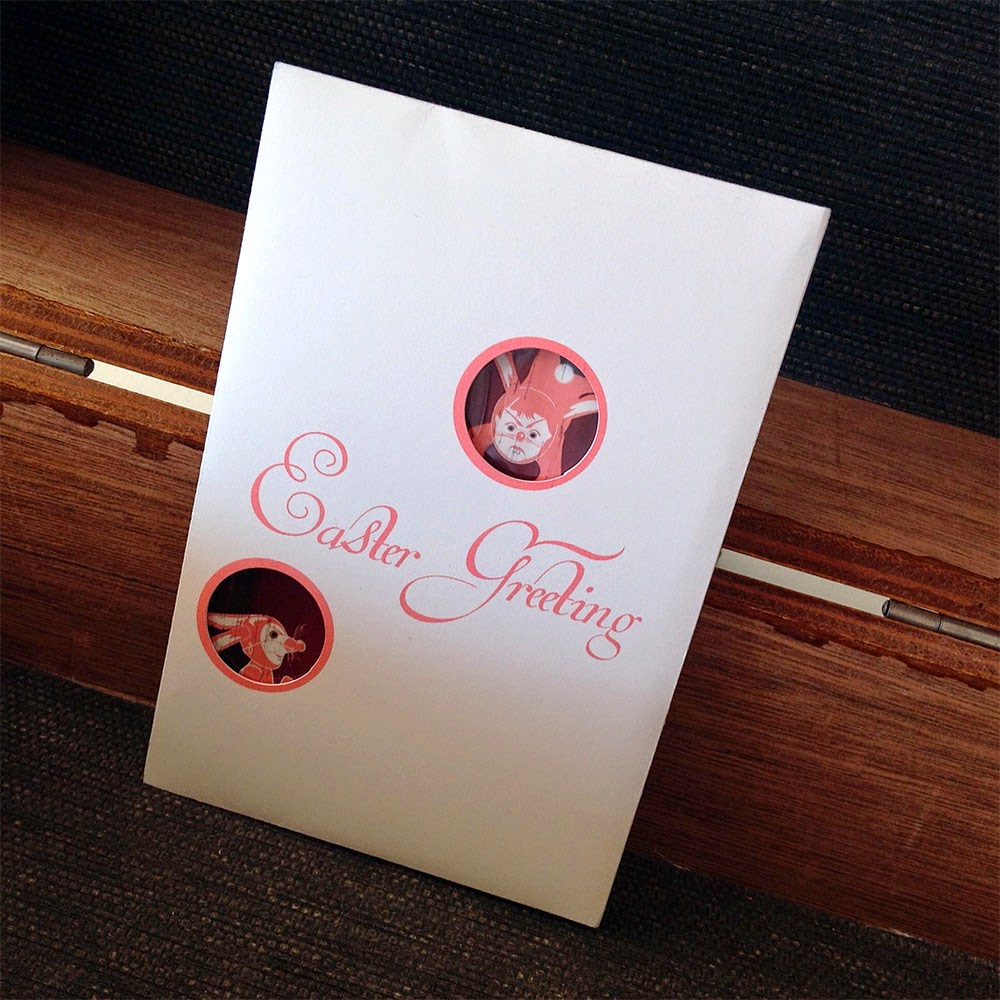 This is the 2/2 set of artist proofs created before the final 5/5 run of "soot-faced" Creeps. I cannot fully recollect why this set was created before the final packaged sets, but I believe it must have had to do with the direction of the dies upon the 2-ply museum board (since the die cutting process actually gives a subtle front and back edge to the paper). In any case, unlike the 1/2 set sold off the previous year, the 2/2 set was never even bent into shape... as shown here standing at full attentive display in this old crate. 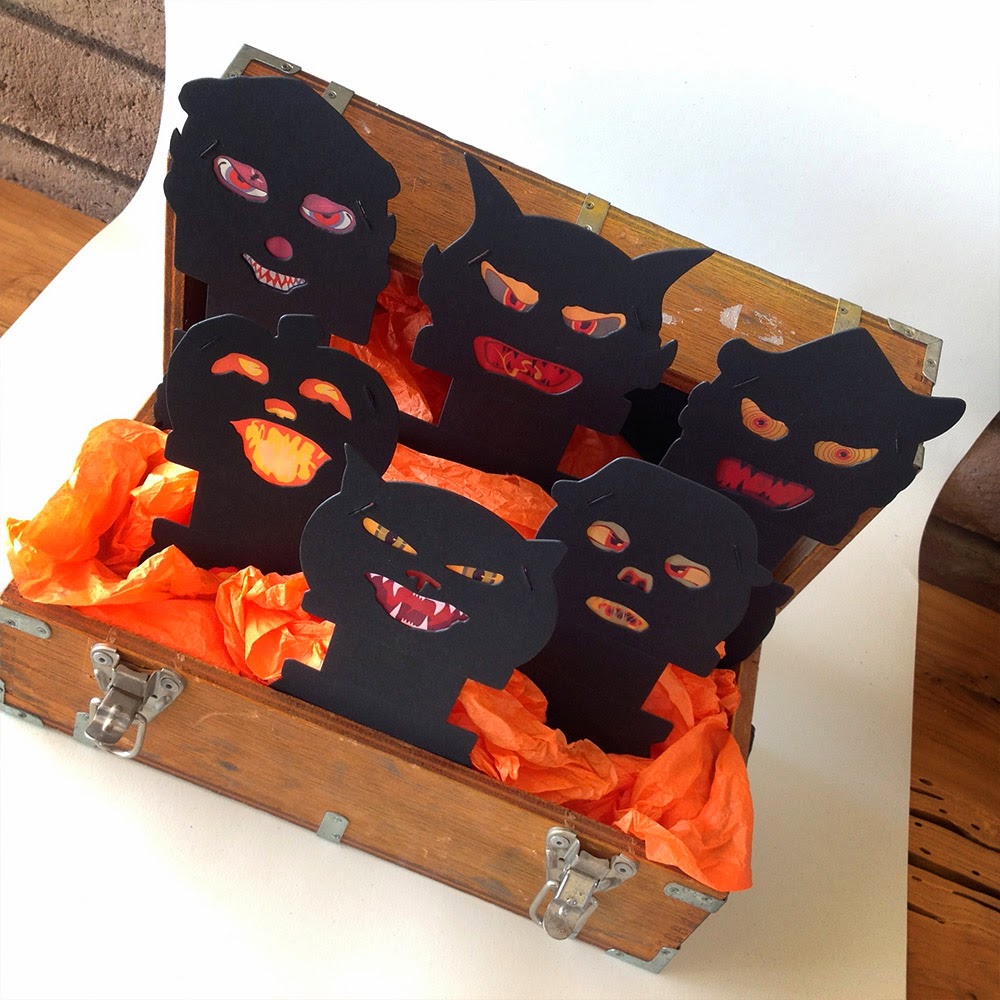 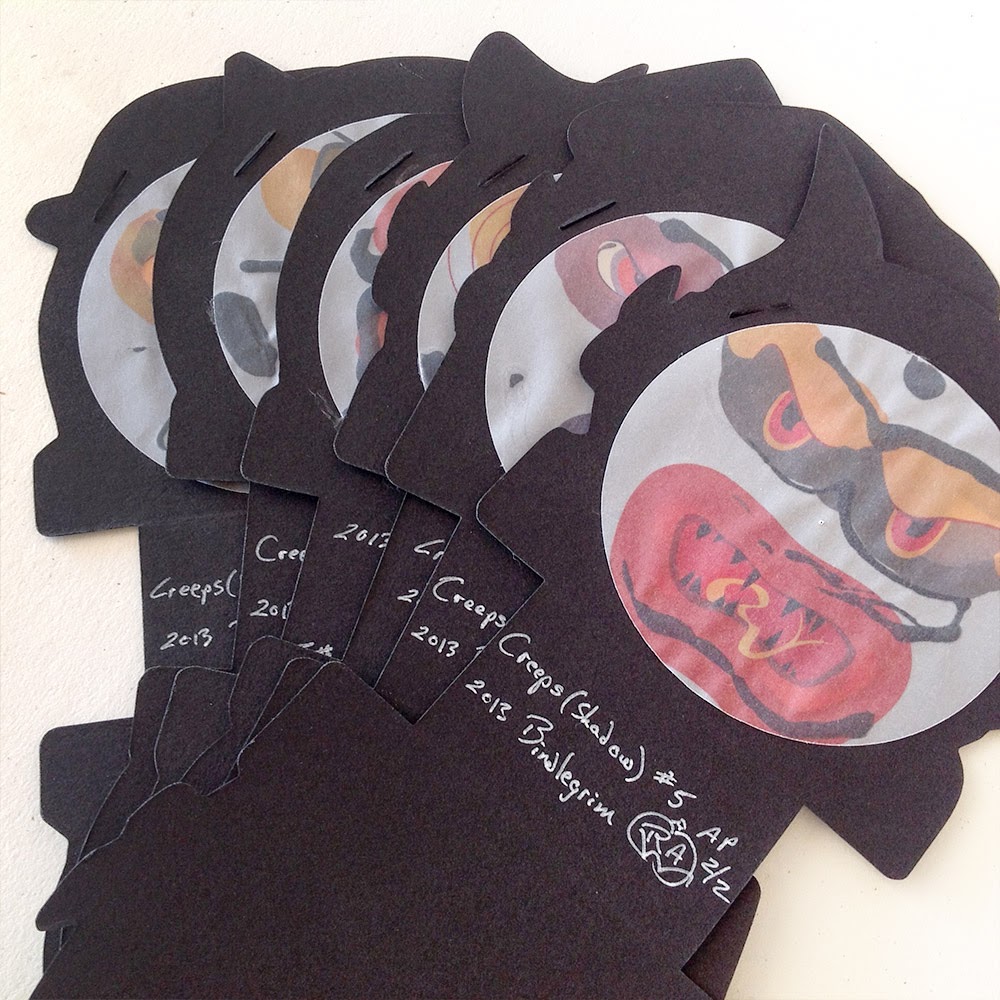 With Bindlegrim's 2013 lantern stock rapidly vanishing - I continued to grab up a few other items for the sale... and thought it fun to gather a collection of printed goodies. This lot contains the following:
1) On Stranger Winds - Tall Tales for Shorter Days: a signed copy of the book with the newer matte cover (which I love much better than previous editions for its soft touch). The book is a collection of stories and poems (and was a winner of the New Mexico Book Awards in 2013 in the Sci-Fi/Fantasy category). Cover art by David Irvine (aka The Gnarled Branch).

2) Cornish Litany cards, 2011, has a limited number #/25 of signed cards. Both here are numbered #6/25. These postcards are artist reprints of the original art that was commissioned by Cornish Litany fanatic Debra Mesiter: A Litany... Cornish and Otherwise.
3) Cornish Litany cards, 2012. This set was originally release with a (sold-out) 12-sided Cornish Litany lantern that contained the same imagery.
4) One set of 4 Hallowe'en cards from the new Spooklights lanterns by Bindlegrim. Un-signed from a moderate run of 100 sets. 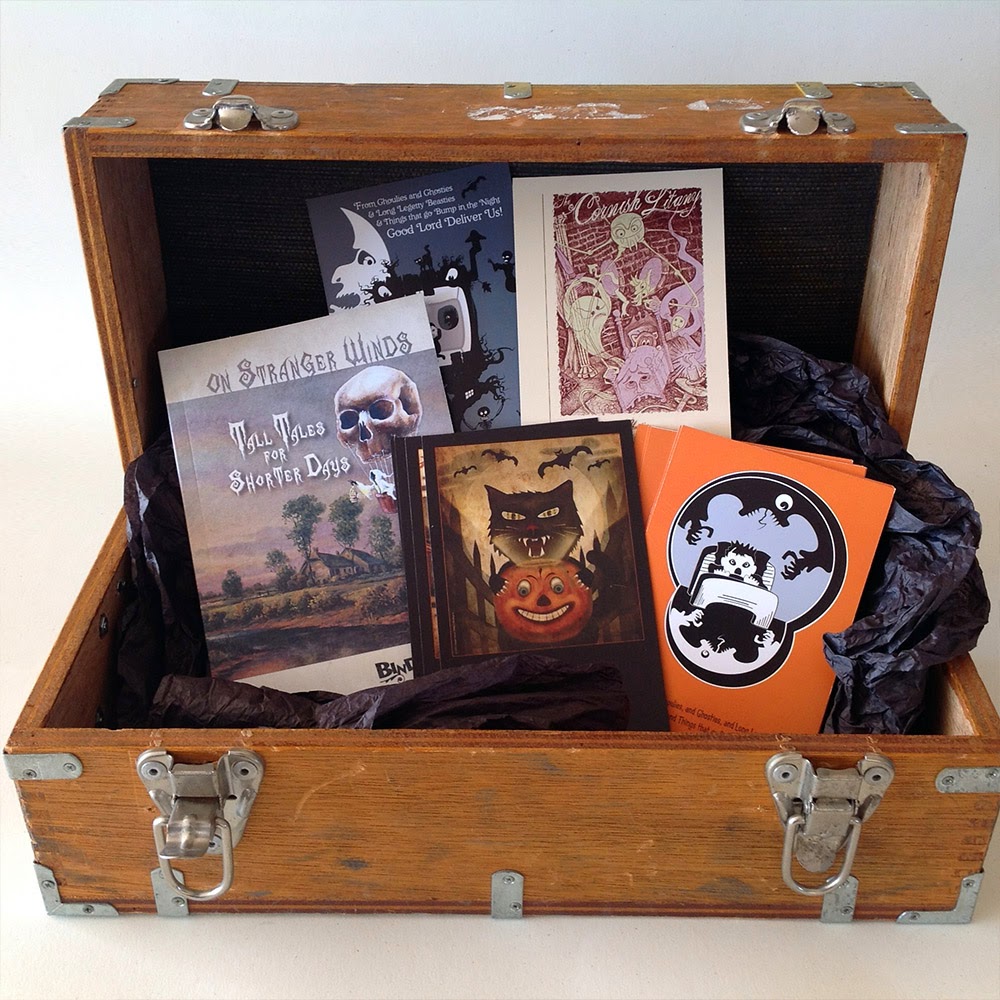 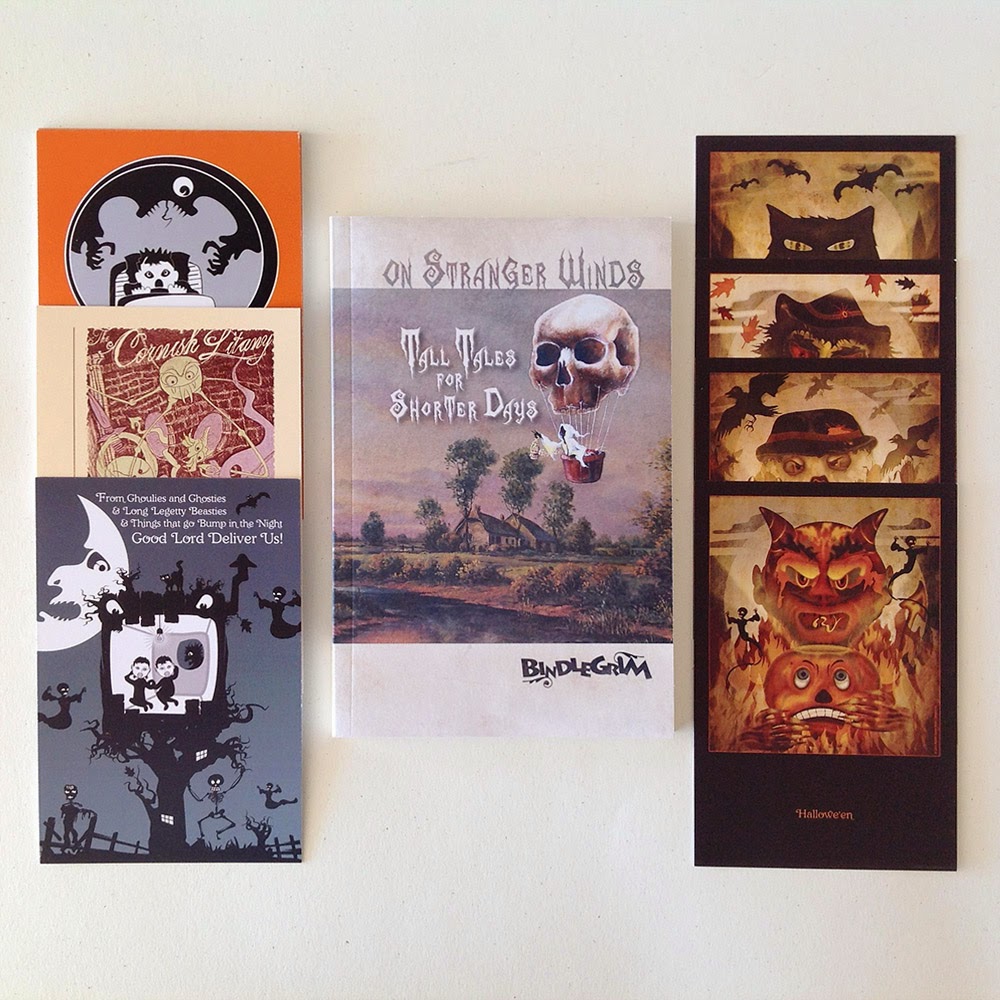 Thank you once again to all for considering these items for your Halloween bindle. Stay tuned for week 3 starting this Sunday, the 26th.