Some days before deciding (for certain) on a more vintage, representational style for "The Pumpkin Dream" there was some thought of creating pen drawings, and in a more surreal style, somewhat more akin to the pen and ink drawings seen here on wobblebox. There was really only one sketch to speak of in this mode - seen below where there was an attempt to take elements from the poem, and then sit down for a session of surrealistic doodles... (this sketch would have paired with the first eight lines of the poem):

We trust our tale illuminates
of bogymen whose hunger slake
on children in a sugar feast
the fearless know as trick-or-treat
While I would still love to find the time to do this illustration style (perhaps in some later edition down the road), the thought of trying to create 37 drawings that I would be happy with... while so many other tasks needed to also be done (this book was DIY on everything), I gave this up for something I thought would be more editable - vector art (see the first blog entry Sketchy Beginnings and/or A Brief History of The Pumpkin Dream (Part 4) - Cautionary Vectors).

Well, in going back into my sketchbooks, it appears I did almost a full round of more representational style art, and then for some reason (probably the zero budget) vacillated back toward the possibility of pen and paper once again (see below). I think this next drawing (probably inspired more so by being very tired) was a thought toward doing something sort of retro, loose, and surreal with lots and lots of negative space.  And I was apparently still trying to figure out the first lines of the poem, which were perhaps the hardest lines of the poem to complete - and there are likely hundreds of versions of the beginning)....

I guess part of me is very interested in Halloween imagery with a little surrealistic twist - and in looking back through the sketchbook - even before the idea to do "The Pumpkin Dream" was settled in my mind... I found this whimsical drawing that takes the Jack O'Lantern into some weird realms - such as the octo-pumpkin? 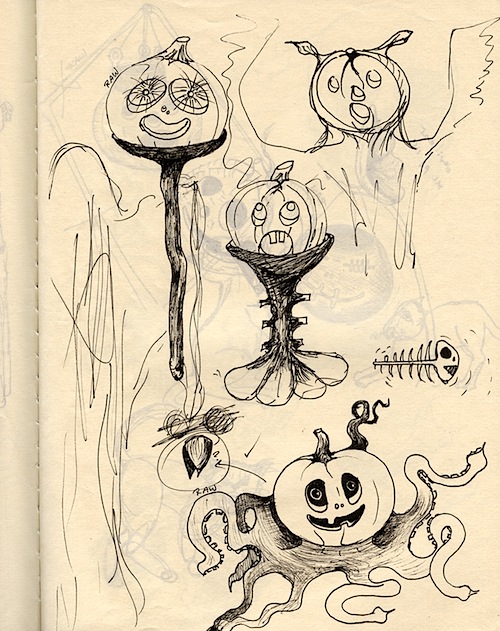 Next up: Pumpkin Sketchbooks #2: Versions
Posted by Bindlegrim Bindlegrim at 1:13 PM