Continued from Pumpkin Dream Sketchbooks #1: Surreal. In this entry Versions, or, The House that JOL Built.

Continuing a look inside the sketchbooks.... I wanted to review just the first image that developed while I was going back and forth on the decision between surrealism versus representational art. The drawings therein have a couple of run-throughs of almost each illustration for The Pumpkin Dream, in a representational style. 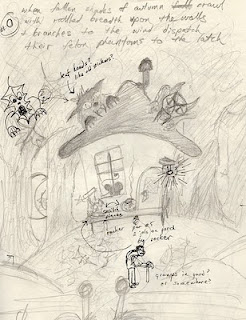 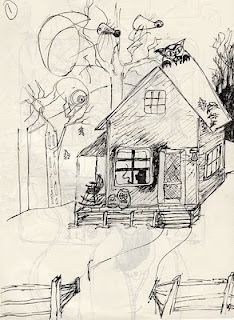 Above were the first two representational drawings of the very first scene, that in my head, I saw as containing more detail and color (pulled from using examples of multi-color vintage art such as this 1950's vintage candy card below):

The deciding sketch came from the following very simple felt-tip marker drawing below, as I attempted to do all elements of the image simplified into only two colors. I felt this image was the closest so far to my original idea to mimic some of the vintage Halloween styles of two-color products, (seen just below the next drawing), and of influence from 1930's cartoons. 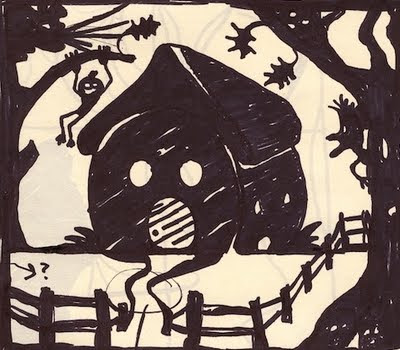 Vintage Halloween firescreen (below top) and lampshade (below bottom). The witch and black cats from the firescreen were direct inspirations and make guest appearances in The Pumpkin Dream, (such as here).

With style finally settled in my mind, (also thanks to some supportive input from friends),  I did at least one more sketch to flesh out the contents a bit more, and delved into the vector recreations - (in orange and black with highlights of white). 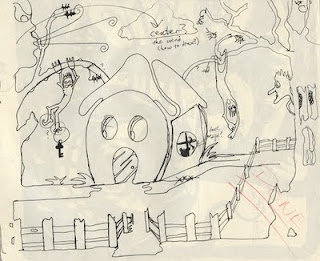 The first image below was an experiment in post processing of the images (something I later decided against), (also notice the nixed North Wind character above and below blowing up a storm)! 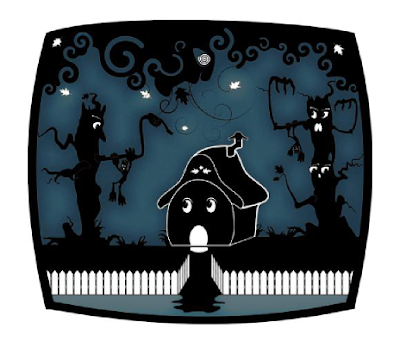 And then the next image below was at last the final book image with some small additional details, (such as the rounded vintage TV-esque corners, the presence of the main character at the door with lit pumpkins at his feet, and the supporting role of the moon always with some indicative expression). 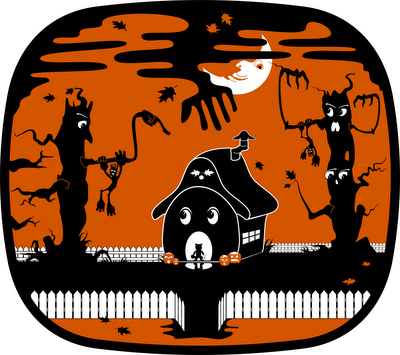 With the white highlights, the resulting image was a mix - somewhere between, as mentioned, vintage 2-tone lanterns, 1930's cartoons, and vintage packaging/decoration that were created between the 40's and 60's such as this candy seal: